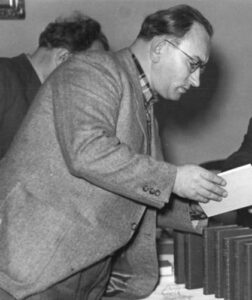 Another figure who only came to the UK shortly before the outbreak of the war and left again soon afterwards but is certainly worthy of a mention- and should be better known – is Jan Petersen (originally Hans Schwalm). Peterson was one the leading member of the tiny ‘League of Revolutionary Proletarian writers’, re-established in 1934 by the KPD in the death-throes of the ‘Third Period’ and used it to publish material about life under the Third Reich. (By October 1935, the Gestapo had tracked down almost all its dozen or so members, most of whom did not survive.) Active in the Communist underground against the Nazis, ‘Our Street’ was dedicated to the victims of Nazism and explicitly ‘For Socialism’.
‘Our Street’ is the only anti-Nazi book to have come out of Nazi Germany written, moreover, by an actual participant. It thus carries much historical significance. Written in 1933/34, Petersen saw the book as part of the struggle in the overthrow of Nazism but also, in a criticism of the KPD, as a call for an anti-Nazi united front with Social Democrats (Social fascists according to the KPD official line of the time A worker-writer, he typed down the events as they happened. ). The book draws on much original material, such as leaflets.
Set in Charlottenburg, Berlin, it documents how SA33 attacked working class anti-Nazis and Communists in ‘Our Street’ and were in a type of civil war with the Red Front (a well-rooted KPD associated anti-Nazi defence grouping) over control of the working class streets, community centres and taverns in the period leading up to the Nazi’s seizing power as well as in the months following. Petersen focuses on the resistance to the violence exacted on the street’s working class inhabitants in revenge for the killing of a stormtrooper (though in fact he was killed by his own side during one of the ruckuses). It opens by printing the names of 18 actual victims, seven before January 1933 and eleven after (though one beheaded in prison).
In 1960, Petersen wrote in a new introduction to his book: ‘Work on their [anti-Nazis] story was often interrupted: when comrades with whom I was immediately in contact in the underground resistance movement were arrested, as was often the case. Or when the Gestapo put my name down on their black list, which happened twice…. After they came to power, the 33s would burst into our lodgings, revolver in hand, and search the whole house. I was lucky – I had moved shortly before.’
Writing the book itself took courage. But so did getting it out of Germany. After two failed attempts, Petersen baked the manuscript into two cakes, dressed up as if he were going skiing and smuggled it past the SS guards at the Czech border. An English translation was published in 1938 by Gollancz’s Left Book Club as Our Street: A Chronicle Written in the Heart of Fascist Germany.
Somehow, he managed to travel from Berlin to the popular front conference in Paris in summer 1935 on how to use ‘culture’ against the Nazis, where, apparently he wore a mask throughout and Gide read out his work. He never returned to Germany, finally arriving in the UK in the late 1930s. Little is known about his time here, except that he continued to write, was associated with the KPD German speaking exile group, and was an active member of the writers section of the Free German League of Culture (essentially a KPD front). He returned to East Germany after the war.