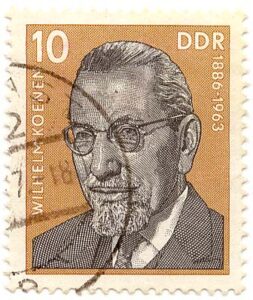 After an early period of militancy, Koenen became more of an org man than most people included here, but his remarkable history is still illustrative of how far the German left’s roots lay in the revolutionary years and upheavals of 1918-1923, how difficult the British state made it for even a Reichstag deputy who was a Communist to get in to the UK and what a small sectarian fishbowl these anti-Nazi refugees jostled in.

Born in Hamburg, the son of a socialist carpenter and a cook, he joined the SPD in 1903 and later became one of their newspaper correspondents. But in 1917, he joined the USPD and was the commissar of the Worker and Soldiers’ Council for the Halle-Merseburg district in 1918/19. Here, in Central Germany, he and the Left Independents did a remarkable job of organising the railwaymen, the coalminers, and workers in the chemical industry and organising a provisional regional workers council..1   In 1919, he joined the KPD, and was elected to the National Assembly. During the Kapp putsch, he helped organise the strike which stopped the putsch.  A delegate to the Trade Union confederacy, he argued that a workers government be formed but these proposals did not garner much support. Although he had fallen out of favour by 1933, he was one of some 40 people at the ill-prepared and ineffective ‘Sportshall’ meeting of the KPD Central Committee on 7 February 1933.

Koenen fled Germany in June 1933 on the decision of the party leadership (who had technically to give permission), first going to Saarland, then to France, then Czechoslovakia. He had already once attempted to reach the UK but had been blocked from doing so and had great difficulty getting in now. Ellen Wilkinson, a Labour MP,2  obtained a British permit for Koenen on the basis D.N. Pritt would provide him with the necessary support.3 He was then taken into custody as an “enemy alien” in 1940 and sent on to Canada but brought back to the Isle of Man in December 1941. He was then released following the intervention of Eleanor Rathbone, MP, and D.N.Pritt. On February 26th, he appeared before the Home Office advisory committee whom he assured he would not take part in British politics. But he did not see this as debarring him from involvement in German exile politics!

He had become a founding member of the “Free Germany” movement in London where, however, his absence seems to have given rise to serious political wrangles with Kuczinski, amongst others, in part over the degree to which Germans, given the low level of resistance, were responsible for Nazism. This led on to his deposing Kuzcinski from the leadership. (Charges of who was spying for whom also abounded.)

In 1945, he returned to Germany and took part in rebuilding the KPD where he appears to have taken the Party line.

2 Wilkinson, originally on the left of Labour, visited Nazi Germany in 1933 and wrote ‘Why Fascism?’, which condemned the Labour Party’s gradualism, arguing for grassroots workers’ unity against fascism . She was to become Minister for Education in the 1945 Labour Government by when she seems to have left her radical roots behind.

3 In April 1933, Pritt amongst others signed a letter urging the Labour Party to form a United Front with the CP etc against fascism, rejected at that and the following year’s Party conferences. A lawyer, in 1934 he successfully defended the veteran socialist Tom Mann, on trial for sedition and won damages against the police for the organisers of the National Unemployed Workers Movement. From 1936, a, Labour MP and member of the Labour Party’s Executive Committee, he was sympathetic to Stalin, including over the Moscow Show Trials. In 1940 he was expelled from the Labour Party for defending the Soviet invasion of Finland. He later defended many of those accused in the anti-colonial struggle including those accused of being MauMau.