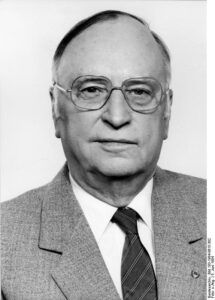 Kurt Hager lived in the UK between 1939 and 1946. But his main claim to fame is his Stalinism. Although an active and brave anti-Nazi in Germany and then Spain, he was always a Party man.

He joined the Communist youth organisation KJVD in 1929, the KPD in 1930 and the Red Front in Wurtemburg 1932. He worked as a journalist for the KPD’s Agit.-Prop section. Arrested in Stuttgart on 1.3.1933, so two days after the Reichstag fire, he was imprisoned in the Heuberg concentration camp. Upon release, acting on Party instructions, he continued his underground activities during 1934-36, working as a courier in and out of Switzerland, France and Czechoslovakia (as “Leo” and “Georg”), a highly risky activity. Imprisoned in Switzerland, upon release in 1936, he fled to Paris.

He was then sent to Valencia, Spain as director of the German service of Radio Madrid, responsible for the Radio Freedom transmitter, where he organised international broadcasts (a role which almost certainly involved him in accepting some terrible political compromises). He remained there until the fall of the Republic in 1939. A leading member of the exile KPD leadership, he was briefly Interned in the – appalling- Argelés camp, Gurs. Supported by the Czech Refugee Trust Fund (presumably because of his earlier courier links), he managed to gain entry into Britain.1

Hager ignored the Government’s injunction to remain out of politics and, some time during the war, became the political secretary of the exile KPD organisation in Britain after Kuczinski, whom, it appears, he had removed from this position!2 Hager was also prominent in the Free German League of Culture, writing under the pseudonym “Felix Albin” and was active, as best he could, in other KPD exile committees during his time in the UK.

In 1940, Hager was interned, first at Huyton, then the Isle of Man. British trade unionist and left-wingers successfully campaigned for his release. He was then assigned to forestry work and worked later as a welder. In 1946. Hager was repatriated to Germany, where he lost no time in continuing his KPD career, becoming a member of the Central Committee and the SED’s chief propagandist.3

2 Kuczinki’s career was extraordinary. He does not feature in these biographical snapshots because he appears more of a KPD apparatchik than an anti-Nazi activist. He fled Germany to the UK in 1936 where, in 1937, he became the Secretary of the faction ridden KPD exile group and was also deeply involved in the Free German League of Culture, leaving to help the US war effort. He became a well –known and generally well-loved academic in E. Germany.