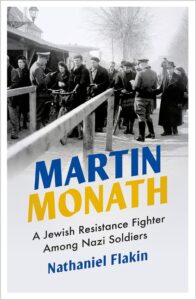 As with many refugees from Nazism, especially when active anti-Nazis, it is only possible to conjecture about much of Monath’s brief life: correspondence is lost, family, friends and comrades are killed or vanish, and to add further complexity, Monath kept changing his names. Flakin has retrieved some hard – to -find archival material and has drawn together a number of threads, in particular Monath’s leading and extraordinary role in producing and distributing Arbeiter und Soldat. The book is a rare reminder of the analysis and bravery of a tiny group of Trotskyites in the last years of the war in France: it begins by describing a scene in late 1943 when young French workers and German soldiers greet each other with raised fists of solidarity.

Like a surprising number of future revolutionaries, both from Germany and then Palestine, Monath first became active in the Zionist group: Hashomer Hatzair. A ‘socialist’-Zionist youth organisation, it wanted young Jews to emigrate to Palestine to build a new nation-state, but based on a socialist collectivist economy. Inevitably, the group was deeply split in its attitude to the creation of Israel as a solution to anti-Semitism, a split represented within Monath’s own family. Monath’s brother escaped to Palestine. The brothers corresponded: some miraculously survived. Monath was not drawn to go but crucially also saw how fighting anti-Semitism by building a non-capitalist, non-racist anti-discriminatory society in Palestine was not going to succeed when it was built on the dispossession and exploitation of the people already living there.

Monath went for a few years into the political wilderness. Indeed, lest we forget how far Jewish pro-emigration organisations were tolerated by the Nazi regime till close to the outbreak of war, Monath did not escape on foot but left Germany, unhindered, in 1939, first by plane from Berlin to Hamburg and then Hamburg to Brussels without fear of arrest.

Monat then lived for a few years in Belgium where he became a leading member of the underground Trotskyist party led by Abraham Leon and of the Belgium section of the Fourth International, though how he developed this perpective is not known.

He somehow moved on to France in May 1943. Although his political route is not clear, by 1940, he had become in effect a Trotskyist. In a letter from the late summer of 1939, Monath predicted a new world war would give birth to a new revolutionary wave. His letters also reveal strong criticism of the Comintern’s/KPD’s ‘popular front’ which he saw as the abandonment of worldwide socialist revolution, though I was not clear whether Monat held a degenerated workers state position towards the USSR. He is correspondingly critical of the later KPD- inspired ‘National Committee for a Free Germany’, geared towards collaborating with Wehrmacht generals and some bourgeois fractions to bring down Hitler. But nor were the Allies on their side: their bombing campaign was designed to prevent Germans developing an anti-Nazi movement. He supported a united and anti-imperialist front. German fascism was to be overthrown by a revolutionary rising of the masses.

In 1943, he founded a League of Communist Internationalists (German section of the Fourth International). The Fourth International rejected the idea that World War II was a war between “democracy” and “fascism.” The workers’ movement must not subordinate itself to the ‘democratic’ bourgeoisie. Instead the imperialist war has to be transformed into a civil war by building illegal cells of German soldiers for a revolutionary struggle against the Nazis..
It was in pursuance of this goal that Monath tried to organise fraternisation between the German occupying soldiers and French workers in 1943. This is post-Stalingrad, Africa was lost, the Allies were slowly crawling up Axis-controlled Europe and bombing German cities to smithereens. Germany was losing and some German soldiers, many originally working class, will have wondered why they were fighting.

Little is known of Monat’s tiny group except that it published ‘Arbeiter und Soldat’ primarily around Brest, first published in July 1943 (and all transcribed here in English for the first time). In the first editions, Monat wrote about the 1918 German revolution, the Russian revolution, the Spanish civil war and against Stalin’s leadership of the communist movement.

How the organisation and distribution took place is, unsurprisingly, far from clear. Most of those involved did not survive and the few who did, do not always have clear memories. In Brest, where German troops were stationed for months at a time (a precondition for success), Monat was the driving force and led the discussion circles with the soldiers, using the newspaper as a basis once or twice a week.
Flakin does tell us a story. A German soldier, the son of a former KPD official, met a young French postal worker: Robert. Robert slowly revealed that he was part of a clandestine revolutionary movement. A small group of soldiers started to meet up with him. A young printer with ‘parts’ hidden in his garden, started to produce their small bulletin: ’Zeitung für Soldat und Arbeiter im Westen’. It proclaimed that they were workers and called on German soldiers to join the revolutionary struggle. Inevitably, it – and they – survived only too briefly. In October 1943, the Gestapo arrested at least 25 German soldiers and 25 French Trotskyists, most of whom were killed.
Arbeiter und Soldat reappeared in May 1944 and then twice more. Flakin makes a distinction between the original three editions which were intended for a small group of sympathisers and this version which was an agitational broadsheet directed at German soldiers generally. For May 1, 1944, the paper urged sabotage and fraternisation. ‘Every shot fired at a European proletariat is a shot fired at the German revolution’. In June, the paper argued that the American forces were there to strangle European revolution and impose Anglo American imperialism and were equivalent to the Nazi clique. It calls for proletarian uprisings and the building of revolutionary cells.

But Monath was arrested in July 1944 and murdered. Flakin asks what Monath’s significance is. It is easy for us to look back and perceive the war as won by the ‘Allies’, with a few appreciative nods towards the heroism of the millions of Russians who were killed or died. What would we have done if, against all the odds, we had somehow still been alive and struggling to end Nazi rule in 1943? Might we not have welcomed alliances with almost any anti-Nazi force?

But Monath stands for a very different tradition. His task was to organise illegal cells of German soldiers to help create a revolutionary struggle against the Nazis. Almost none of those involved lived to tell the tale. Yet here I am writing a review of a most welcome book about Monath and the tradition he represented.