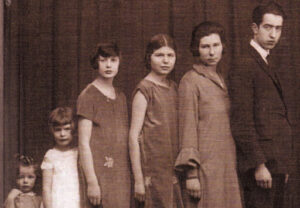 Jurgen Kuczinski is better known than most left-wing German refugees, partly thanks to the book by John Green, the work by Prof Brinson and partly because members of the family clan keep his memory alive in both the UK and Germany.

The father of the clan, Robert R. Kuczynski, a left-leaning and much respected statistician, emigrated to Britain in 1933 where he obtained a post at the LSE (and was to die here soon after the end of the war). The six children then also took refuge in Britain, at different times: Jürgen and the five daughters: Ursula, Brigitte, Barbara, Sabine and Renate.

Jurgen joined the KPD in 1930 but, unlike most of the refugees considered here, does not appear to have ever been a ‘grass-roots’ anti-Nazi activist. Though his entanglements with the USSR and Russian spies might seem exciting, his contribution to the anti-Nazi struggle was from the easier slopes of left academia and ‘counter’ institutions.

He contributed to Die Rote Fahne, especially in his role of economics correspondent right up to 1936!  Sometime in 1936, Kuczinski was able to travel safely out of Germany and move to the UK, a move triggered by instructions received from Moscow.

Here, around 1937, he took over the leadership of the KPD group in exile from my father, Siegi Moos. The Government had banned all political activity on risk of deportation so activity had to be covert: no minutes appear to have survived and reliable information is scant.

But a document obtained from the Bundesarchiv from 1934 does provide some information and lists 19 people who were part of the KPD exile group. Ilse Meyer in a letter from 1993 remembered 12 people. MI5 files (KV2/12410) from 1935 reveal the group had 5 members who were ‘Communist agents and agitators for the KPD’ (including Siegi Moos).Despite being microscopic,  MI5 continued their surveillance: the spy probably being Karl Otten (see introduction).

Jurgen only arrived in Britain in late 1936 and probably took over the exile group in early 1937, though whether Siegi  Moos was pushed or jumped is not known. In his biography, Kuczinski was dismissive of the KPD exile group as essentially a group of disorganised intellectuals, dilettantes and student types. But his leadership was more than a change in personal. By 1937, the KPD leadership had finally understood that the Nazi regime, far from collapsing, was well established.  According to Merson, the issue of the popular front, which had been ‘accepted’ in 1936, was still causing major splits amongst the émigré communities especially in Spain or France but those debates also impacted here. Unlike between 1934 and 1936, the emphasis was not primarily on building up contact with KPD exiles and getting anti-Nazi publicity into Britain but rather finding and working with anti-Nazi allies of almost any political hue. The Popular Front position also encouraged a loose membership, with a ‘near-party’ established from 1936 for sympathisers. My mother, Lotte Moos, when being interrogated in Holloway prison by MI5 in 1940, also stated there had been two levels of membership: an inner and an outer grouping, whose purpose was united front work, but, she stated witheringly, that in reality all membership was loose.

It is not clear what the membership or effectiveness of the group was from 1937 till the outbreak of war. Certainly Exil, written later under the aegis of the GDR, provides a very different list, probably from 1937/38, of about a dozen German Communists  most of them from ‘bourgeois, Jewish backgrounds’ [sic]. (The size of the group grew in 1939 following the Nazi invasion of Czechoslovakia but, as we can see from other biographies here, very few of the post 1938 refugees became involved in this exile group).

Though it is not possible to be certain of any of this, Kuczinski seems to have been the link with the KPD’s exile organisation in Paris where he would have been informed of the Comintern line. Not all accounts agree on this and it puzzles me as it suggests he was not concerned about being refused readmission by British authorities. (My father would never have dared to leave the UK at this point for fear he would not have been let back in.) At any rate, MI5 raised no objection to a Home Office proposal to grant Kuczinski permanent residence, a rare privilege for a Communist at the time!1

Kuczinski also worked with Palme Dutt, the British Communist Party’s leading theoretician and Party loyalist, with whom he developed a friendship, and became a member of the CP’s Labour Monthly’s editorial committee.2 In 1939, under the auspices of the Left Book Club, set up by the publisher Victor Gollanz, he travelled round the UK, giving many lectures about Nazism and economics and adopted the pen-name: John Knight.3  The Left Book Club published his short book on labour conditions.

Kuczynski was then interned in January 1940 but released quickly, following the Home Office’s intervention against MI5 wishes, whom, as it turned out correctly, had long suspected him of espionage; the Home Office had been lobbied by an array of the left’s great and good! Kuczinski continued to feed the Russian embassy with economic forecast without apparently any hindrance, following in the footsteps of his sister spy, Ursula. (Though it lies outside our concerns, it does appear Kuczinki provided the link between Klaus Fuchs and the USSR!) Though there were some serious fallings out, he became a leading figure in the Free German League of Culture, and an object of great concern to MI5: his released MI5 file extends to nine volumes!4

Kuczinski was recruited by the US intelligence agency as a statistician and worked for the prestigious US Strategic Bombing Survey to get hold of information on German armaments production, almost certainly providing the USSR with what he found out.5 At the end of the war, Kuczynski returned to Germany, against the will of the British government who feared the influence of Communists but with the help of the Americans. It was as a Lieutenant Colonel in the US army that he first went to the West, then the East. He did well in the East, though never fully trusted.

2 Labour Monthly while not officially a CP organ, was closely associated with the CP and was edited throughout most of its existence by Palme Dutt. Its semi-autonomous status was primarily in case the CP was bannedl.

4 Kuczinski was known to MI5 before 1936 because Germany’s secret intelligence service had passed on his name! He got into the UK by pretending he needed British library facilities to complete a book (Brinson and Dove, p79,80)

5 It is always worth asking where these-generally impecunious- refugees got their money from, especially as the British state had made getting an established post close to impossible. Although one must always beware the words of a spy, Otten reported to MI5 that Kuczinki was surprisingly flush with money which came from KPD party funds and which he invested in the stock market ( op cit, p160)!