About twelve members of Neu Beginnen, a group formed in 1929 mostly by left-wing members, mostly ‘intellectuals’ of the SPD became exiles in Britain. Loewenheim, their main theoretician, unlike the others, remained in the UK. 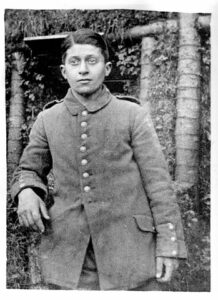 Loewenheim first joined the Wandervogel (‘Wandering Bird’), the principal German youth group with around two million members, whose activities centred on hiking and nature and a Jewish youth group, the Judische Jugendbund.1 A soldier at the front during the war, Loewenheim then joined the Sparticist League and participated in the Spartacist uprising of 1918-19. He then joined the KPD and quickly rose to prominence. In 1920 he was sent to the 2nd Comintern Congress as a youth delegate, meeting Lenin there and became part of the leadership of the Communist Youth International.

On the left-wing of the KPD and influenced by his friend, Paul Levy, early on, he had disagreements with the Party line. He began to take an interest in Trotsky’s critique of Soviet domestic and foreign policies and resigned from the KPD in 1927. Loewenheim joined the Social Democrats two years later.

He began to gather a group who criticised both the KPD’s and SPD’s sectarianism and their splintering of the workers’ movement: the ORG (short for ‘Leninist Organisation’(!)). Aware of the economic crisis at the time, he analysed the threat of fascism, including in Germany, earlier than many on the left. He aimed to build a new cadre based, non-sectarian Marxist party. It recruited from the KPD, SPD, KPO and SAP but by early 1933, still only had about 100 members, though that was to grow briefly to about 500. It had many contacts among Berlin’s working-class, in particular amongst railway workers and recruited several dozen trade-union leaders, several leaders of Communist Youth and much of the leadership of the Socialist Workers Youth (SAJ) to his group in 1931.

But the emphasis of the organisation on clandestine work well before 1933 (so different from either the KPD or SPD), while limiting, did prepare the organisation to work illegally once the Nazis were in power. In his 1979 memoirs, former Org member Gerhard Bry wrote about the period before 1933: ‘We learned how to use concealed code in writing and in telephone conversations, shift meeting times and places by pre-arranged rotations that made them different from those agreed upon by phone, arrange for danger signals, avoid being followed, discover tails, shred carbon and other papers We also had technical experts in micro-photography, chemists who developed quick burning paper which left little residuals and capsules in which undeveloped microfilm could be carried in the mouth and quickly destroyed, carpenters who built really hard-to-discover hiding places’2

In April and May 1933, he and others established a connection to the exiled SPD in Prague and set up a foreign secretariat there, though attempts at a limited alliance failed. In August 1933 Walter Loewenheim wrote the programme “Neu Beginnen” which gave the group its name, sub-titled: ‘Fascism or Socialism: a Basis for Discussion among Germany’s Socialists’. The pamphlet suggested a programme for labour leaders (sic) to fight fascism. Loewenheim understood that the world economic crisis and the ever-deepening instability of German politics would not inevitably lead to the radicalisation of the working class and a victory of socialism. It brought out the crucial factor of fascism’s mass character as well as its appeal to the petti-bourgeoisie. It attributed the Nazi’s success to the disunity of the labour movement and emphasised the importance of anti-fascist propaganda. It also argued that the struggle against Nazism would not be in Germany but abroad. This was a controversial analysis even at the time, opening the door to an endorsement of ‘flight not fight’.

Although very critical of the SPD, the pamphlet hoped for a revival and redirection of the SPD. Indeed, the pamphlet was published in September 1933 by Prague SOPADE. It was then smuggled into Germany under the cover of ‘Arthur Schopenhauer, About Religion’! It apparently garnered much support.

But In 1934, a division –inevitably- took place between the majority who wanted to ‘fight on’ and Lowenheim’s so-called ‘defeatist’ position that they should emigrate because staying was futile and dangerous. Lowenheim thought that Nazism was not temporary (as indeed the KPD still believed) and that resistance could not succeed. Lowenheim fled but little grouplets continued to organise in Germany, apparently in particular spying on German arms transport, information they then got to the exiled Social Democratic leadership (not the same as active resistance). They also illicitly distributed pamphlets and their newspaper, Socialist Action, exceedingly risky activities (27000 copies in 1935 but this was its peak!). But there were hundreds of arrests, including of the leadership and the organisation had essentially collapsed well before the war began.

Loewenheim had fled to the Czechoslovakia where it appears he and other leading members of Neue Beginnen attempted to stage a ‘coup’ against the SOPADE leadership, claiming that it was they who represented German Social Democratic workers. From there, he went to London in 1936.3 Here he took the name Walter Lowe. He was interned from 1940 to 1941.

After 1945 it was former “Neu Beginnens”, like Erwin Schottle4 and Richard Löwenthal5 (but not Lowenheim) who worked most actively for the reconstruction of the SPD i.e. reform from above, in W. Germany. Loewenheim however remained in England where he ran an engineering company together with his brother and was no longer active politically.

1There was a strong current of anti-Semitism in this group, some regional branches even excluding Jews. It evolved into the super-patriotic Bundische Jugend by 1939. There were alternative groups: the non-Zionist Kameraden,the Zionist Blau-Weis and the socialist Haschomer Hazair

2This quote is from John Cox ‘Circles of Resistance: Jewish, Leftist, and Youth Dissidence in Nazi Germany’, 2009, Peter Lang, p37

3Unfortunately, I have not managed to find any references as to how easily Loewenheim –and other members of Neue Beginnen (see other footnotes) got into the UK. The leaders of the SPD who sought refuge here, though later-in 1940, had the greatest difficulty gaining admission.

4Erwin Schoettle, a leading member of the SPD, fled Germany in 1933. In exile he headed the SOPADE border secretariat for southwestern Germany from Switzerland until 1939. Then he came to London where he headed the Neu Beginnen group and played an important role in the establishment of the Union of German Socialist Organisations,which brought togther SOPADE, the Socilaist Workers Party ISK, Neu Beginnen and a representative of trade unions. In 1946, he returned to Stuttgart and resumed his career in the SPD. He exemplifies how close Neu Beginnen was to the SPD, despite it wanting to appear non-partisan.

5Richard Löwenthal joined the KPD. He demanded rapprochement between Communists and Social Democrats to enable them to fight the Nazis. He was expelled from the KPD in 1928 after criticising the KPD’s theory of social fascism. From 1929 to 1931, he belonged to the KPDO and then joined the circle around Walter Loewenheim. Unlike Loewenheim, Löwenthal advocated open resistance against the Nazis. In August 1935, Löwenthal also emigrated to Prague, where he co-ran the foreign bureau of “Neu Beginnen”. In 1939, Löwenthal fled to London, where he worked as a journalist. In 1948 he returned to Germany as German correspondent for Reuters News Agency.