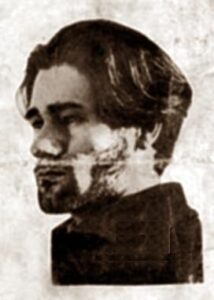 Helmut Klose is a fascinating and unheard of German exile who fought in the Spanish Civil war and settled in the UK from 1939; details about him can be obscure.

When only a teenager, he joined the anarcho-syndicalist Freie Arbeiter-Union Deutschlands (FAUD, Free German Workers’ Union), became a ‘professional’ ‘hobo’ and a writer. He fled Germany for Austria after he had been arrested a few times, then Yugoslavia in the summer of 1933 but was expelled in February 1937 because of his anti-fascist activity: possession of Spanish anarchist literature.

An extraordinary report from Emma Goldmann in 1937 survives: ‘Another one [arrestees] is comrade Helmut Klose, a member of the CNT-FAI. He was arrested on the 2nd July. No charge has been made up to this date, neither was he brought before a Judge. …. He came to Spain in March. He joined the frontier service of the FAI, in the ‘De la Costa’ battalion. After the dissolution of this battalion, in June he took his discharge, entered the service of the agricultural collective in San Anores. In compliance with the request from his group he undertook the reorganisation of the Tailors’ Collective of the Emigrants Committee. The charge made by the Cheka of his having disarmed officers while in the Frontier Service at Figueras is entirely without foundation’.1

He was imprisoned till l December 1938 and then interned in the camp at Gurs, France where he was involved with the committee set up by anarchists to counter the Stalinist control of the majority of prisoners. With the help of a German friend and the mediation of a British artist, Hedda Carrington, he settled in Cambridge in 1939 . When World War II broke out, he was interned on the Isle of Man and was then sent to Canada till the end of 1941.

In the internment camp he became friends with the German zoologist Hans Werner Lissmann. He then appears to have worked on a farm in Cambridgeshire, and married a Land Girl, Rita and had a large family. He got a job as an assistant in the laboratory of the Lissmann Institute, Cambridge, specialising in animal behaviour. Shortly before his death, Klose became friends with Orwell. He died in 1987 at Haslingfield.