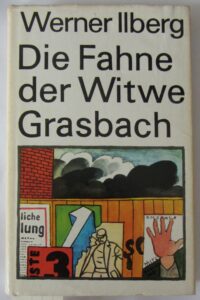 llberg joined the SPD in 1925 , but was soon expelled as a communist. From 1932 he worked as a critic for the communist press in Berlin and became a member of the League of Proletarian Revolutionary Writers. After being imprisoned twice by the Nazis,, he emigrated to Czechoslovakia in 1933 and in 1939 to England.

Here, he joined the KPD in London as well as being active in the FGLC. He contributed to ‘Das Wort’, a German literary exile magazine published in Moscow, and ‘Free German culture’, the monthly magazine of the FGCA. After he returned to Germany in 1947, he was convicted by a British military court for distributing, in the Soviet Zone, the novel ‘Die Fahne der Witwe Grasbach’, a semi-autobiographical novel which looked at the failure of the KPD and SPD to stop the Nazis.