German Socialists in Britain and their Shifting Alliances 1933-1945 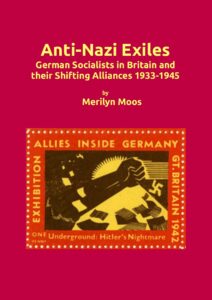 The refugees included here almost all fled Germany as political activists, most from a working class background. They risked their lives again and again in Germany, often escaped arrest and probable death without knowing where they would end up. Hans Jahn, who had become President of the Railway Union, remarkably continued to try to organise the anti-Nazi resistance amongst railway workers, even when exiled in the UK. Some of the exiles risked their lives all over again, working with the Allies, and in particular with SOE (including Jahn). A small group of German refugees, almost all of whom had fought in Spain, fled to France and then were sent by the French Government to camps in Algeria, then also ‘volunteered’ to fight with the British. The final section (which is not yet up) will look at the hundreds of Germans who were conscripted into the 999 ‘Death battalions’, a sub-section of the Wehrmacht, made up largely of resistors, who either deserted to the partisans in Greece or clandestinely supported them. The SOE were working alongside the partisans to defeat the German troops. But many of this brave group of conscripts then stayed with the partisans when they took on the British armed forces.Some German anti-Nazis only worked with the Allies to defeat Nazism.

Of those who lived, many returned to Germany, both East and West, though a few settled in the UK. Their extraordinary lives deserve more attention than they have received.

The next part of the “Anti-Nazi Exiles” series is “Hans Jahn, Biography of an Anti-Nazi Trade Unionist” by Merilyn Moos. Free download from here…