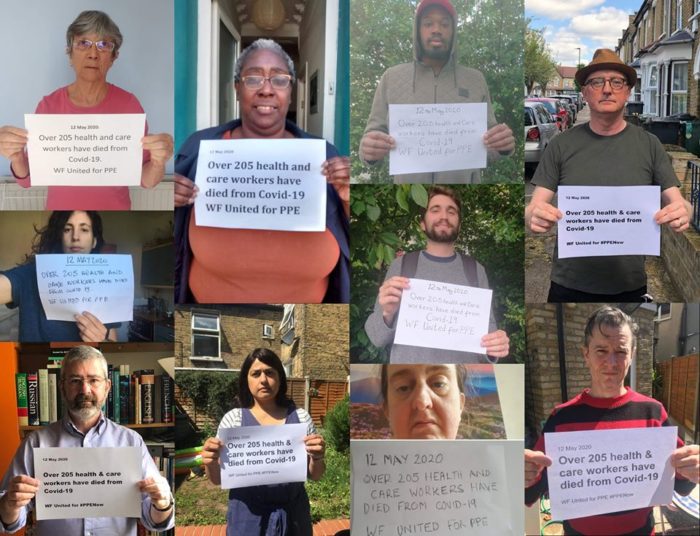 Revelations that more than 200 health and social care workers have died as a result of contracting the Covid-19 virus has prompted a number of campaign groups and individuals in Waltham Forest to come together to demand that essential workers are provided with Personal Protection Equipment (PPE) as a matter of course.

The campaign was initiated by WF Trades Council – which represents union members in the borough. It has been joined by representatives of political and community organisations – such as the WF Mutual Aid groups, the Waltham Forest Workers’ Coronavirus Support Group and Leyton & Wanstead Labour Party – as well as concerned individuals.

“Thousands of WF residents have shown their appreciation for the fantastic job done by essential workers on Thursday evenings”, said Organising Committee member, Tom Taylor. “Now we can repay them by supporting the “WF United for PPE” campaign.

The UNITE branch at Whipps Cross hospital has expressed fears about the scarcity of PPE. Even when supplies are delivered, they do not necessarily reach every ward. There’s also a lack of consistency. Some days the full kit is there, on others it isn’t. Consequently, some workers keep “expired” masks for several days rather than risk having no mask.

The campaign also has similar concerns about the safety of workers in the care sector. The situation is confused. Martin Goodsell, of the UNITE East London Community branch, said, “It’s not certain that supplies of PPE are delivered regularly or even if the equipment is of the required standard. For these reasons, we want to reach out to care workers across the borough to help ensure they are being supplied with adequate PPE. We encourage them to tell us about any problems and we can help them to join a trade union to ensure they are safe at work”.

The campaign will also be commemorating those who have given their lives in helping to save others. Organising Committee member, Sonali Bhattacharya, said, “A very moving tribute to some of those health and social care workers who have died from the Covid-19 virus was held locally on Workers’ Memorial Day. Since then, even more workers have died. We will be organising an online memorial to them and will involve local people in commemorating their loss. No one should risk their lives just to go to work”.

Guen Murroni, part of the Mutual Aid network in the borough, said, “We hope as many local people as possible will support our campaign. It’s fantastic so many people have volunteered to defend the safety of health and social care workers. The more people who join us, the more pressure we can exert on employers and statutory authorities to ensure workers are protected”.

People who want to know more about the campaign can find further information on its webpage (http://wfunited4ppe.org/) or on social media”.
Notes for Editors
The “WF United for PPE” was initiated by WF Trades Council – and has brought together representatives of political and community organisations – such as individual trade union branches, the WF Mutual Aid groups, the Waltham Forest Workers’ Coronavirus Support Group and Leyton & Wanstead Labour Party.
It has three main aims and objectives:
(1) To demand that every essential worker in the borough is provided with PPE. No one should risk their life just by going to work.
(2) To hold employers and statutory bodies to account for the provision of PPE – up to and including the government.
(3) To commemorate the workers who have died, and to continue to fight for the living.
Further information about the campaign can be found via the following links:
(a) Website: http://wfunited4ppe.org/
(b) Facebook: https://www.facebook.com/WFUnitedForPPE/
(c) Twitter: https://twitter.com/WFUnitedForPPE
People can also contact the campaign via email at: wfunitedforppe@gmail.com