With the news of increasing numbers of c-19 infections and deaths in east London combined with the continuing reports of the failure to provide workers with suitable personal protective equipment (PPE) and training, trade unions in Waltham Forest have set up an on-line petition calling for swifter action to protect workers and patients lives.

We should not be expecting those front line workers who care for and aid recovery of the elderly, unwell and dying to have to risk their lives any more to deliver that care. 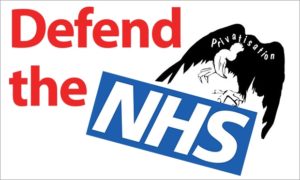 “All trust debts should be wiped clean by the Treasury, and contracts renegotiated and brought back into public ownership on grounds of poor value. The premise of PFI that the private sector is more efficient in delivering and managing infrastructure projects has repeatedly been shown to be false,”
Dr John Puntis, retired paediatrician, co-chair of Keep Our NHS Public

The Barts Trust is deeply in debt and sinking deeper, with projected deficits for 2014-15 rocketing upwards from £43m at the end of December to £93m, according to its February board papers – or even as much as £100 million, according to the Health Service Journal

The financial problem has been a ticking time-bomb beneath the surface ever since the then Bart’s and the London Hospital Trust was given the go-ahead in 2006 to sign up for the costly £1.1 billion scheme to redevelop both Bart’s and the Royal London, financed under the ruinously expensive Private Finance Initiative (PFI).… Read on ...

Some staff at Whipps Cross, and in the social care sector, are being asked to work in extremely dangerous conditions.
The Trades Council is organising a Petition To Bart’s Health Trust to demand adequate Personal Protective Equipment (PPE) to keep them safe.
Sign here…

On Tuesday evening we held an informal Zoom WFTC. 12 delegates joined in, and 2 wanted to, but couldn’t connect.
So here a few notes for your information.
Len Hockey Unite Sec for Bart’s Trust led off with a graphic description of the situation in Whipps Cross. He outlined how 30 years of neo-liberal polices had left the hospital in a woeful position to react to this crisis, with privatisation, outsourcing, marketization of everything, and the casualization of jobs.
His main worry was the scarcity of PPE. Although PPE is arriving, it’s not necessarily reaching some wards. Every discipline is scrambling around.… Read on ...

Please find below a mailing from the #CoronaContract campaign. Please share this widely and join their webinar this Thursday 9 April at 7pm.

Dear colleagues and comrades,
Apologies for this mass email. My name is Jordan, I’m a fixed-term postdoctoral researcher at Birkbeck, UCU member and one of the organisers of the #CoronaContract campaign to secure the livelihoods of precarious university staff during this crisis.
Will you please consider sharing this email with your members and relevant lists?
Our open letter has gathered over 1000 signatures and counting, and we were recently featured in a Guardian article calling out universities’ shameful treatment of casualised workers.

Unite, the union for the UK’s bus workers, has warned that there is “no time for trials” of the new safety measures introduced to prevent the spread of the coronavirus and said that bus operators, regulators and the government must take immediate action to ensure bus worker safety.

Immediate action
Unite made its call following the announcement today (Wednesday 8 April) by Transport for London (TfL) that it was trialling closing the front door on buses on a limited number of routes.

Unite believes that the front doors on London buses should be locked immediately and alternative arrangements should be made for payment during this time.… Read on ...

Tuesday 28th April from 10:45-11:45
Every year on April 28th, all around the world the trade union movement unites to mark International Workers’ Memorial Day.

The coronavirus pandemic has affected every worker regardless of sector or locality. Tens of thousands of workers worldwide have died. More have fallen ill or continue to go to work risking their lives.… Read on ... 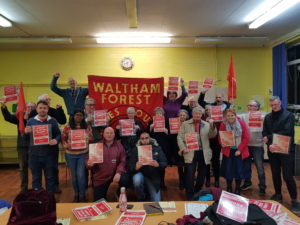 Just a little report of the special meeting we held on Tuesday this week for those who couldn’t make it. I think it was generally agreed that it was a very worthwhile meeting. Around 20 attended, and had a full discussion.  We not only had the branch sec of East London CWU, who made a great contribution, but also a young Unite worker who had been sacked from City Airport, basically for organising the union. See photo attached.
It’s quite clear that, with the banning of the CWU strike action, the gauntlet has been thrown down to the unions. CWU is just the first.
… Read on ...