We are asking community and faith organisations, voluntary groups and residents – all those living and working in the areas served by Bart’s Heath NHS Trust – to sign this open letter to Barts Health Trust to express deep concern about the recent introduction of upfront charging and ID checks in the NHS and about the participation of Bart’s Trust in the implementation of such a harmful policy.

Please sign the letter by filling in your organisation’s details (or your personal details if you are a patient) and call on Bart’s Health:
• to stop asking patients for ID
• to suspend upfront charging and
• to stop collaborating with the “Hostile Environment”.… Read on ...

We face a growing and serious challenge from the racist and fascist right in the UK, encouraged by Donald Trump and his close associate Steve Bannon and now boosted by the release from jail of former EDL leader Tommy Robinson.
Waltham Forest is no stranger to the fascist English Defence League and its former leader Tommy Robinson – they have repeatedly targeted the borough and each time been met by a huge, united community opposition.

With this latest threat of a new far right and fascist movement emerging, we as a matter of urgency need to come together to build the broadest response possible to defend our multicultural borough.… Read on ...

The May Day event which was planned for 28 April – and which included a commemoration of Workers’ Memorial Day – will not now be taking place as the Council has decided not to grant permission for it to go ahead.

Waltham Forest Trade Union Council Officers have a number of concerns about this decision. We will be reporting them to our next meeting and a full statement will be issued in due course.
In the meantime, we want to thank those who agreed to speak or perform at our event – as well as those organisations that were to provide food and drink, child-friendly activities and campaign stalls.
… Read on ... 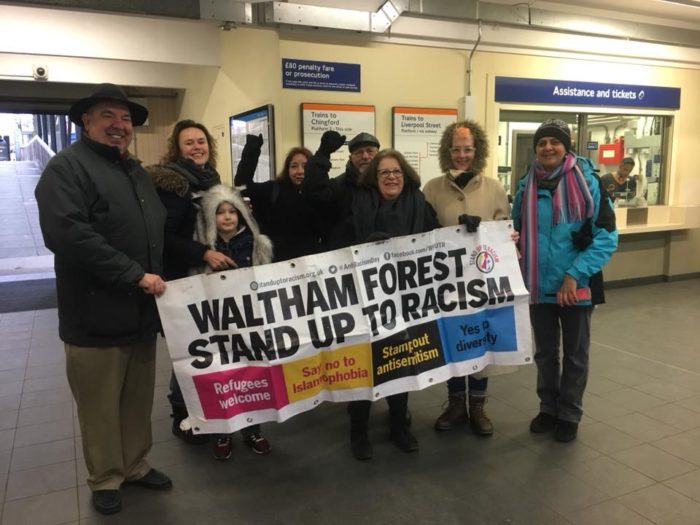 On Tuesday 3 April, residents from across the borough will be taking part in solidarity actions in a show of unity with the Muslim community, including linking arms around mosques in a symbol of solidarity, peace and unity. 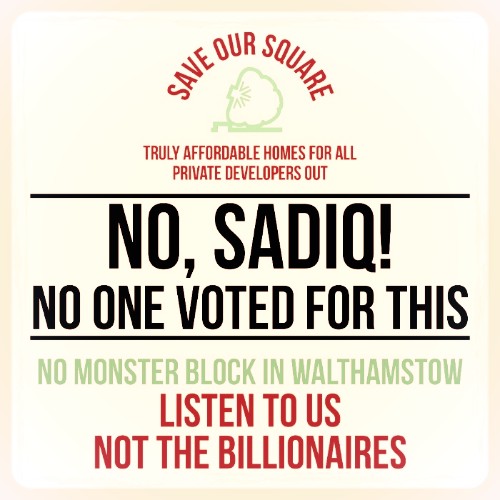 Today we launch the next stage of the Save our Square campaign
This fight is only getting started and we can win!
As Save Our Square chair Nancy Taaffe has written: “If you didn’t already know, that disgrace of a politician, Sadiq Khan, sanctioned the monster block plans today ”

“Save Our Square met tonight and we will be issuing a press release tomorrow as an official response to the news. The one thing we need to tell people is that we will fight for every blade of grass in that square, and we will resist all forms of social cleansing“.… Read on ... 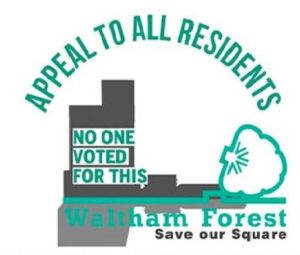 Walthamstow Saturday market square is normally a lively place, but last Saturday 24th February it was buzzing. After weeks of leafleting and raising the alarm, around 600 angry demonstrators came together, declaring their opposition to regeneration plans for the shopping Mall, which will take away one third of precious public space. A whole range of people and organisations came, many with homemade placards; artists brought models of the proposed monster blocks and marked with posters the trees destined for the chop.
A line was sprayed to show, according to the plans, exactly how much space was going to be lost.… Read on ...

Slideshow of “Occupy the Square”

All photographs copyright Mick Holder who is happy for them to be used on social media but if any commercial media wish to use them, they should contact him…