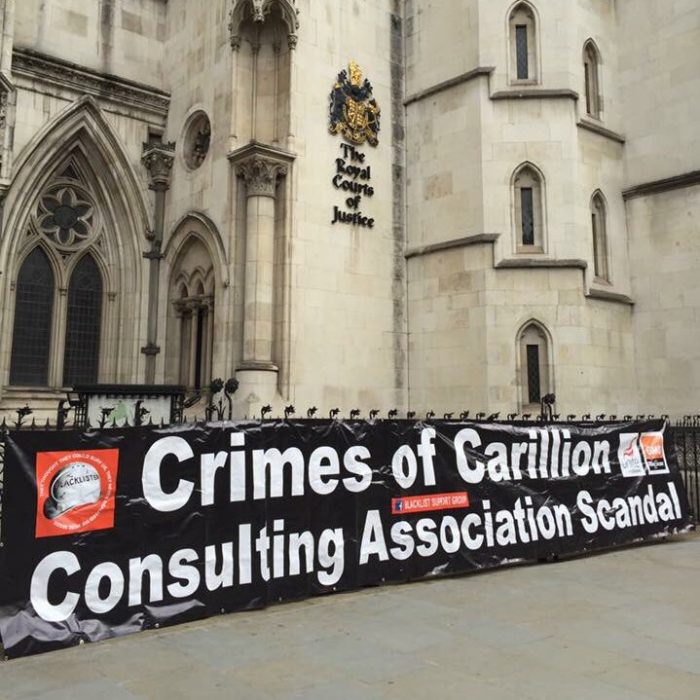 Carillon admitted in the High Court that they blacklisted workers who complained about safety on their building sites, while at the same time milking public sector contracts for millions. Workers on projects run by Carillon need to be paid and are entitled to their pensions but no more public money should be given to the bosses of the disgraced company. In any civilized society, these people would be facing criminal charges.

When you invite blacklisting human rights abusers to run the NHS and school meals, don’t be surprised when vampire capitalism attempts to suck the taxpayer dry. The government should bail out the NHS not Carillon or their bankers. The government should nationalise Carillon now at the current market value of their shares (nothing) and go further by banning all of the construction companies involved in the blacklisting human rights conspiracy from any publicly funded contracts.

Roy Bentham, blacklisted carpenter from Liverpool and BSG joint secretary commented:
“Carillion going bust to me is Karma. No tears crocodile or otherwise from me.
They were up to their neck in blacklisting union members for raising safety concerns. They got caught and said sorry but they were only sorry for being caught. The fact I couldn’t get employment on the Liverpool Royal Hospital or Anfield shows they never changed their spots. The fact that the manager who placed me on the Consulting Association files back in 1995 was still working there up until this morning shows how serious they took this as a human rights abuse. No one disciplined, never mind sacked over the scandal tells you all you need to know“.

Dave Smith, BSG joint secretary posted on his FB page:
“Carillon blacklisted me after I raised concerns about safety on their building sites; it ended up in the European Court of Human Rights. At the very same time the company were milking public sector contracts including in the NHS. Not another penny of taxpayers money should be given to these wretches“.