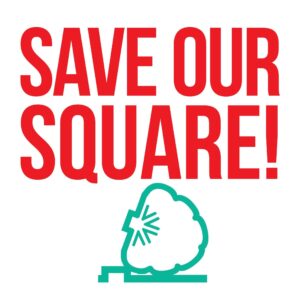 Last Thursday 11th February campaigners form Save our Square, and others, attended the live-streamed Mayor’s Question Time at City Hall. We swarmed there like bees! We did this because the WF Planning Committee passed new plans for the town square, which includes constructing 2 monster blocks of 34 and 26 storeys, with over 500 flats – but none of them affordable for the 9000 on the housing waiting list, the low paid or even for teachers and nurses. They are just a profit-making venture for a South African investment company.

The next stage is for the plans to go the GLA to be approved – or not – by the mayor. Despite the quite controlled event, we put in loads of questions, and organised our forces to make such an intervention that Sadiq Kahn referred to us as “the People’s Republic of Waltham Forest”! The event had a bit of a Gamestop flavour!

Jennetter Arnold the GLA member covering WF welcomed our efforts and urged the mayor to get over here and listen to our concerns directly.

We want to make that happen, so SOSq is calling on all friends and supporters to write to the Sadiq Kahn and Jennette Arnold to respond as soon as possible. The letter below was sent out to supporters giving details. We urge trades unionists and campaigners to write straightaway to City Hall.

The Planning Committee agreed plans once before in 2017 – but not one shovelful of earth was ploughed up in the square due to the campaign – and the trees in the Lime Tree Avenue were saved. Let’s do that again , and get a truly popular regeneration of the town centre with council housing at council rents.

When they try to mute us, we organise to find another way to be heard.

Dear Mr Khan,
You referred to the attendance of our supporters from Waltham Forest at The Mayor’s Question time tonight as ‘The People’s Republic of Waltham Forest ‘. I think your categorising of us in this way, in many ways, accurately reflects the stamina and determination the people of Waltham Forest have shown to prevent the destruction of open land and the building of two enormous tower blocks that will neither be truly accessible nor affordable to us.

I heard you say tonight that the government could impose this scheme if you don’t rubber stamp it. I suggest you make them do that and we will unite with you to resist this. If you don’t agree with it I suggest that you join with us to object to this neo liberal model for housing in London. The homeless queues are growing and the towers are going up.

Central London has been hollowed out as public buildings and land has been gifted to multinational property companies who sell us back ‘units’ that have now proved unsafe and are unaffordable to those on the average wage. The earmarked land in Waltham Forest is freehold land, it belongs to us, it is shameful that a labour council is gifting this land to what is in effect a multinational hedge fund. Growthpoint will be one of the first mass private landlords of this type in our borough.

The reason we came to your question time tonight is that the planning application for the 34 storey tower block and 26 storey tower block is due to be ok’ed by the GLA within the coming weeks and months. We need to meet you urgently (by zoom of course), to discuss our concerns.

People within our campaign are considering standing in the GLA elections in order to be a roadblock to this awful scheme. We would like you to help us so we don’t have to confront you at the ballot box.

Kind Regards
Nancy Taaffe
Chair of Save Our Square