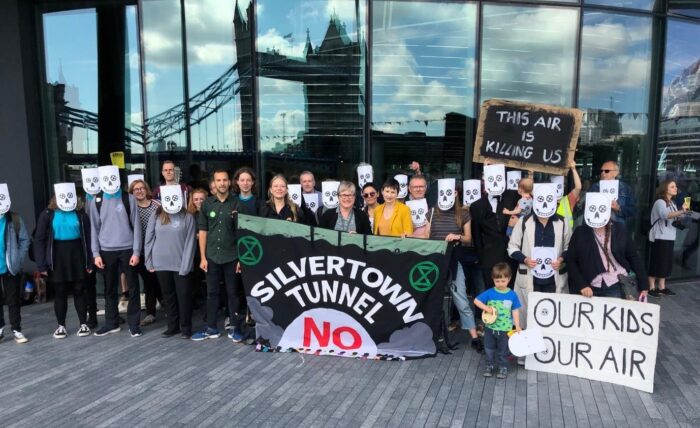 In 2019 the Mayor of London awarded a PFI contract to build the Silvertown Tunnel, despite huge opposition from local residents, environmental groups, CLPs, Labour councils, and prominent Labour MPs. The estimated cost of the project has now doubled to £2 billion.
Opposition is multi-faceted; evidence shows that the tunnel would worsen air pollution, traffic congestion and carbon emissions, and is also financially unviable. One impact would be to enable HGVs to cross the river into one of London’s most polluted areas, passing dozens of schools and nurseries where tens of thousands of children play and learn.
Furthermore, research from the Tyndall Centre shows that London’s transport policy is currently incompatible with the rapid decarbonisation required to reach targets aligned with the Paris agreement, and the tunnel would only make matters worse. TfL will be reliant on high traffic revenue from tolling the Blackwall and Silvertown tunnels to repay PFI financing at time when reducing car usage is crucial.
This project is environmentally disastrous, and impacts disproportionately on working-class residents.
TFL is financially vulnerable and this project doesn’t make economic sense, especially as TFL would be liable for any shortfalls from tolling.
To ensure a just transition, revenue should be prioritised for accessible, affordable and efficient public transport.
It is resolved: –
• To call upon the Mayor of London to cancel this project and to call on Waltham Forest Council and the borough’s MPs to publicly oppose the project.
• To support protest action to stop the tunnel.