UNIONS TO PROTEST AT WHIPPS CROSS HOSPITAL TO DEMAND PATIENT SAFETY, PAY JUSTICE & AN END TO PRIVATISATION ON THE 73RD ANNIVERSAY OF THE NHS 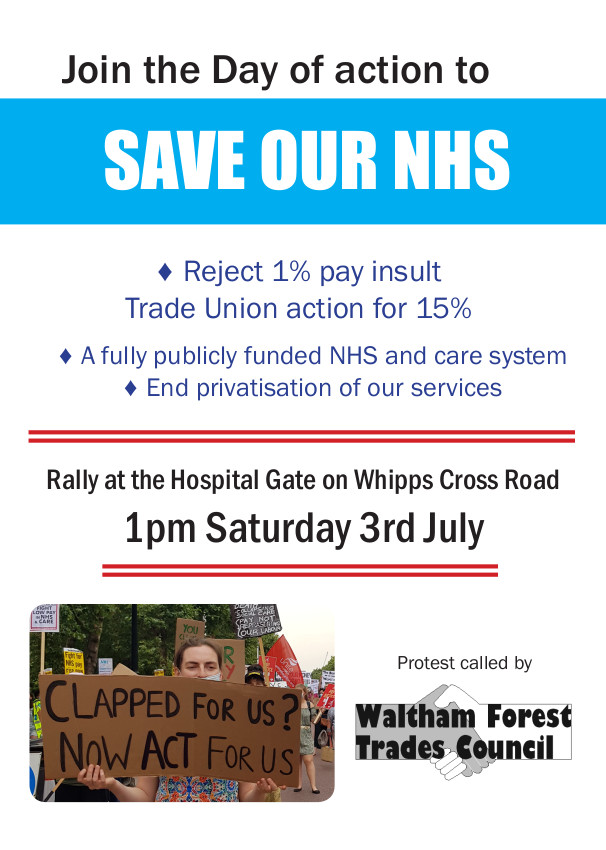 As part of a national day of action in defence of the NHS, Waltham Forest Trades Council will hold a rally outside Whipps Cross Hospital. Union members who work in the NHS will be joined by local trade unionists and campaigners to demand:

Len Hockey, Unite Whipps Cross said: “Our free National Health Service was founded 73 years ago after a mass pressure of the working class. It was a service won by the struggle of trade unionists and socialists.

“But decades of austerity, underfunding and privatisations by the Tories and right-wing Labour has left our NHS in a dire situation. It left patients not being able to get treatment and waiting to be seen. It left our NHS workers underpaid and struggling to make ends meet as well as exhausted and burnout. This cannot continue.”

Linda Taaffe Secretary, Waltham Forest Trades Council, said: “The pay offer of 1% is beyond insulting given the heroic, life-saving work of NHS staff during the pandemic. For Tory politicians who participated in the Thursday clap for the NHS and its workers to now offer them such a paltry wage rise is a massive slap in the face for their efforts. They deserve a massive increase. Fifteen percent, now!”