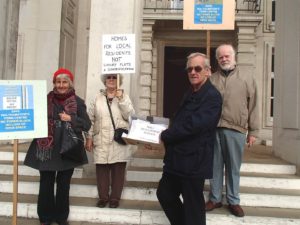 I would like first to congratulate you on managing to secure 50% genuinely affordable homes in the former Holloway Prison redevelopment. I was also delighted to hear in your LBC phone-in with James O’Brien on 4th January that you are going to insist on a minimum of 50% genuinely affordable homes as a firm requirement for all agreements with developers on land under your control, and that you have redefined ‘affordable’ in terms of average income rather than the market values of properties. This seems to me to be a fine example of the Labour Party’s determination to stand up for the ordinary people of London in the face of pressures towards gentrification and the ‘ethnic cleansing’ of the less affluent out of the way of the better off, and finally of the super-rich.

The recent decision of the (Labour controlled) Council of Waltham Forest to hand over one third of the public open space of the town square to developers Capital And Regional to build more shops and four enormous high-rise blocks of luxury flats is shameful in the extent to which it gives in to the commercial pressures that you are resisting in the land deals under your direct control.

The project involves not only the loss of this much-needed public space but the destruction of 81 mature trees, the re-siting of a (diminished) children’s playground next to the bus station with its toxic diesel fumes, the creation of a dense shadow for much of the year on what will remain of the public space and wind-tunnel effects that will make it less attractive for recreational use. In return for all these negative effects all that the scheme offers in the way of public benefit is a few more shops and a few low-paid jobs in retail. Only 20% of the homes will be ‘affordable’ (as shared-ownership investments for those earning Â£90k or greater) so the contribution to the housing needs of the area will be negligible, or even negative if local rents are pushed upwards by the influx of more affluent residents.

This decision was taken in the face of massive local opposition, and the local news media as well as independent architectural groups such as ASH and ArchitectsE17 have been scathing about both the project itself and the way in which local opposition was ignored and over-ruled by the planners:

These ‘affordable’ homes are anything but

I know that strictly speaking Walthamstow town square is not land under your direct control, but it would be incorrect to say that you lack the power to stop this development. The Planning Permission requires your Second Stage approval in order to go ahead, and it seems to me that you can not in conscience give this approval to a scheme that so blatantly and arrogantly ignores your clearly stated requirements in terms of ‘genuinely affordable housing’. The technicalities of land control surely don’t count for as much as the damage to public amenities, trees, children’s health and frankly the reputation and integrity of the Labour Party leadership that would result from allowing this scheme to go forward in its present form.

I am confident that you will agree with myself and all the others opposing this scheme that it is completely unacceptable in its present form and must be modified at least to comply with GLA requirements for the percentage of genuinely affordable homes on offer, which at the moment would appear to be zero. I cannot hide the fact that I consider this to be a thoroughly bad deal in practically every aspect, but if we are selling the family silver we might at least hold out for a fairer price.