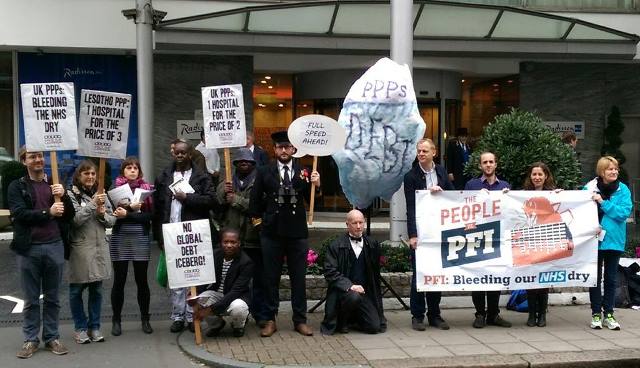 The collapse of Carillion has rightly put the spotlight on the role of Private Finance Initiatives (PFI) in running our public services, bearing out fears trade unions and campaigners have been expressing for years.

PFI is about creaming off profits for private sector fat cats whilst our public services have to make cuts to service PFI debts. At the same time workers see their jobs outsourced on lower pay, and lesser terms and conditions.

The People vs PFI campaign exhibition and booklet highlights why PFI is a “bad thing”, calling for an end to the PFI model for financing public services. PFI drains public finances of resources. But it’s the public that picks up the bill when things go wrong. Barts Health Trust which includes Whipps Cross hospital has the largest PFI project in the country and putting the hospital into failure as it struggles to keep up with the PFI payments. Last year Unite members were victorious in taking sustained industrial action against the multi-billion pound outsourcing company Serco for a wage increase and to safeguard jobs.

The National Audit Office say that annual charges on over 700 operational PFI deals will mean a total bill of £200 billion by the 2040’s. Billions that could be spent on the NHS, our schools, providing social housing, and other public services.
Carillion has also been complicit in the construction industry of blacklisting trade unionists. This further begs the question how these companies are fit to be responsible for public national assets. The Labour Party want to bring PFI contracts back in-house to be run within the public sector by public sector employed workers, ending what Jeremy Corbyn has called the “outsourcing racket”.
Some say we cannot afford to bring PFI contracts into public ownership; if we want to keep our public services and protect workers we can’t afford not to.
Further details contact: wftradescouncil@gmail.com