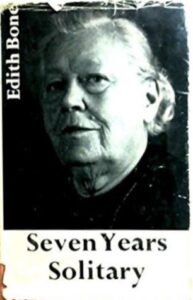 Edith Bone was born Edit Hajós in 1889 in Hungary and became a doctor. From 1923 to 1933 she lived in Berlin. She then came to the UK where she married Gerald Martin, a translator, in 1934 and became a British subject and photographer.

A British citizen, she joined the British Communist Party, not the German speaking exile group, which, though she had lived for the previous ten years in Germany, she was discouraged from having contact with, the Comintern line at the time. She became a CP functionary. MI5 were suspicious of her but seem not to have caught on to her importance. She has been regularly linked to the Soviet Secret Service and may well have helped them recruit other spies. In 1936, she became entwined in the Spanish Civil war, working in part as a doctor, before returning to the UK.

In 1949, Bone went as a free-lance correspondent to Budapest for the Daily Worker. Accused of spying this time for the British government, she was detained in solitary confinement for seven years. (She was freed during the last days of the Nagy Government of 1956 when a student group seized control of the political prison where she was held.) She died in 1975 in the UK, it would appear a lonely figure who had buried herself in translation work, including of historically ‘Jewish’ literature.