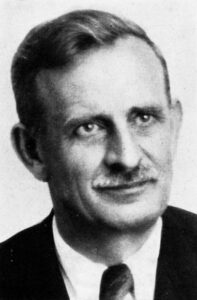 I am including a brief biography of Hans Vogel .including references (including footnotes)  to other Social Democrats refugees. It provides a window onto the Social Democrats exiles in the UK and their continuing bureaucratic orientation and ineffectiveness.

Vogel became an active Social Democrat from 1907. Like them, he supported Germany in the First World War on the basis of patriotism. He became a paid officer and later a member of the Reichstag. He was elected secretary of the SPD in 1927. In 1931, he became co-chairperson.

In January 1933, Vogel fled to Saarbrucken, then to Prague, to Paris and then Portugal (where he and others in the SPD leadership got stuck), and after much difficulty, got into the UK in 1940: there appear to have been serious dissension within the SPD leadership in exile about basing itself here and then the obtaining of the necessary visas.

Morrison, then one of the Labour Party representatives in the Coalition War government was approached but decided against providing visas for the SPD leadership in exile as a collective. Backed by High Dalton, the Labour Minister for Economic Affairs and responsible for ‘black ops’ in Germany  who also wished to counter Communist influence, individual visas were finally issued and accepted by Vogel and Erich Ollenhauer.1 ,2

Though maintaining some sort of Social Democratic presence here, the SPD in exile does not appear to have been very effective in the UK: British officials felt that anti-Hitler propaganda efforts coming from German refugees did not fit their agenda. The BBC resisted employing them, fearing an excessively socialist make-up of their programmes!  The Labour Party did not treat them as allies, though seeing them as a bulwark against the Communists and, as we shall see, there was much dissension amongst their very slim ranks.

In 1941, Vogel cofounded the Union of German Socialist Organisations, made up of different left (but not CP/KPD) organisations. The union included SOPADE, the SPD’s exile organisation,3 the Socialist Workers Party, the International Socialist group (ISK) under Willi Eichler4 and Neu Beginnen, represented by Erwin Schottle and Richard Lowenthal5 ,6   plus Hans Gottfurcht, a representative of the trade unions7 . There was much hostility between the different exiled groups8 who, amongst other issues, contested the SPD/SOPADE’s assumption that they were the legitimate heirs of German social democracy.

There were major divisions, in particular over the issue of Vansittarists. Robert Vansittart, a leading and influential civil servant in the British Foreign Office and advisor to Winston Churchill, argued that Nazism was not a historic aberration but a natural outcome of the German national character, kits aggressive nationalism which was militaristic and essentially expansionistic and that Germany had to be opposed by any means.9 He had called the German people “the moral and political scum of the earth” a view which influenced some of the SPD exiles. Walter Loeb, amongst other leading members who supported this position, was very critical of the SPD’s leadership in exile. Loeb, who had fled to London, in 1942, co- founded the publishing company ‘Fight for Freedom’ which he used to propound Vansittartism. On March 2, 1942, he signed a manifesto, which pointed to the social democratic workers movement complicity in the rise of Nazism and denied the existence of any significant opposition in Germany. He was subsequently excluded from SOPADE.

These arguments all exacerbated the split amongst the exiled leadership. (Another issue was the role of the exiled Sudeten SPD.) The Labour Party leadership apparently felt increasing contempt towards them and terminated Labour’s financial contribution to their maintenance.10

At the same time, the SPD leadership were also refusing any sort of cooperation with members of the KPD, who at least professed support for a Popular Front. In 1944, they eliminated all references in their programme which indicated the slightest revolutionary or Marxist tendency.  As far as I can gather, the SPD leadership made no attempt to establish any sort of exiles ‘broad front’ such as the KPD had done in their ‘Cultural League’ (or, for its members, in the exile group) or even to draw in people who lent towards a social democratic position.

The group’s emphasis was to make plans for post- Nazi Germany. One of their final acts was a brochure published in the autumn of 1945 containing a compilation of ideas for a new political order for Germany. Almost all of them returned to Germany (the West, of course) where many achieved high position in SPD and government circles, maintaining their bureaucratic traditions.

2 Ollenhauer joined the SPD in 1920. In 1933, he fled Germany for Prague, then Denmark, then France, Spain and Portugal and finally the UK. He returned to Germany after the war and became a leading member of the SPD

3 The SPD EC whether for good or ill immediately sent their leaders members out of Germany in early 1933, most of whom went to Prague. SOPADE, the exile SPD group was set up on Prague but fell out badly with the leadership remaining in Germany over their opposition to Nazi foreign policy!

6 For anybody who wants to know more about these organisations, check out Steve Cushion and my book: ‘Anti-Nazi Germans’.

7 Hans Gottfurcht (1896 – 1982) worked in the textile industry, joining a trade union when he was 17. hE began working full-time for the Central Association of Employees. After 1933, he created an illegal trade union organisation in Saxony, Thuringia and Silesia. Arrested in 1937, he was able to leave in 1938 and came to the UK. Here he became an active member of the Labour Party. Interned in 1941, he then set up an organisation of German trade unionists, the Landesgruppe. Letters between Gottfurcht and TUC representatives, including the TUC’s General Secretary Walter Citrine, show the close relationship between the Landesgruppe and the TUC  which financially supported their monthly publication. Die Arbeit stood for international solidarity and called for German trade-unionists in exile to collaborate with their British comrades in their fight for democracy. After  the war till 1950, Gottfurcht was employed by the TUC as a liaison officer with the newly-formed German unions. (https://tuc150.tuc.org.uk/stories/hans-gottfurcht/)

8 There were many sources of deep dispute around the causes of Nazism. Ernst Fraenkel,  who lived in the UK  for a year and who aligned himself with the ISK (the International Socialist Fighting Alliance, a left split of from the SPD), was a leading lawyer, whose seminal though disputed book about the legal origins of the Nazi state fed into the debates,. He saw it as a duality: on the one hand, the continuation of the ‘bourgeois apparatus’, on the other, a ‘prerogative’ and parallel  state controlled by the Nazis and unrestrained by legal guarantees.

Another extraordinary figure whose ideas influenced the ‘debate ‘ was Franz Neumann ( born in Silesia). Involved in the failed 1919 German revolution, though a member of the SPD, he was associated with Neu Beginnen. He fled to the UK in 1933 where he studied under Harold Laski but then left for the US in 1936. He wrote ‘Behemoth: The structure and practice of National Socialism’ (1942), still seen as an incisive analysis, which explained Nazism in terms of charismatic rule. (During the rest of the war, he worked both for the German section of the OSS and, at one time, probably for the Soviet Union, presumably seeing that as one way of defeating the Nazis.)

9 Vansittart worked closely with Kell, the head of MI5, and saw it as essential that German refugees were spied on.