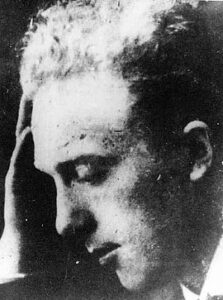 Knufken, originally a sailor and an active anti-Nazi German trade-unionist, had an extraordinary life which stretched from revolutionary activities in the USSR, Germany and Belgium to being a citizen of the UK, working for the British intelligence service. That such a significant anti-Nazi is unknown here is all the more intriguing as he lived in the UK for over 30 years.

Born in Dusseldorf to working class parents, he was drafted into the German Imperial Navy in 1914 but, after arguing for and organising the sailors for Germany’s defeat, deserted. After his arrest in October 1917, he was threatened with the death penalty for treason. Insurgent sailors liberated him from the Kiel naval prison in November 1918. In 1918/19, Knüfken then became active in the in the naval uprising of 1918 and the German revolutionary sailors’ councils. That and the earlier armaments workers’ strike during the First World War persuaded Knüfken of the potential power of grassroots organisation.

Knüfken joined the KPD and then left to become a founder of the KAPD in April 1920. On April 21, 1920 he helped kidnap the fishing steamer Senator Schröder’ and took it to the Soviet Union. Already a member of the ship’s crew, Knüfken smuggled on board Franz Jung (in 1920, Jung had been expelled from the KPD and founded the KPDO) and Jan Appel (also a leading KPDO member). Under Knufken’s leadership,the crew forcefully arrested the captain and officers, locked them in their cabin and took over the ship. They wanted to land 2 delegates for the Comintern’s 2nd World Congress in 1920 and for the Comintern to admit them. Lenin called them: ’Comrade Pirates’ but, though sympathetic, they did not succeed!

Knüfken returned to Germany in October and was arrested. He was sentenced to five years in prison in May, 1921 but was released early on May 1, 1923 and immediately returned to the USSR. From 1923, he was a delegate of the International Transport Workers Union (ITF) and headed the International Seamen’s Club in Leningrad (part of the Red Trade Union International )., he recruited shop stewards on the ships arriving in Leningrad, who then smuggled on board literature, letters and employees of the Comintern.1

Knüfken saw himself primarily as a trade unionist and not as a party communist. In 1925, he supported a strike by Swedish seamen in Leningrad, against Party orders. He wrote later that the leading functionaries in the Soviet Union “understood nothing about an actual trade union movement”. Then, in November 1927, Knüfken took part in a demonstration of the opposition against Stalin which was monitored by the ever-stronger secret police, OGPU.2
In September 1929 Knüfken was arrested on suspicion of membership of anti-Stalinist opposition groups and was imprisoned in Leningrad, and then in the Lublijanka, the headquarters of the OGPU in Moscow. After protests abroad and a demonstration by foreign sailors in Leningrad, he survived and was released in May 1930. He left-though some accounts state ‘was expelled’ – from the Soviet Union in January 1932.

He remained a member of the KPD, although at a distance and found work with “Arbeiter-Illustrierte-Zeitung” in the Hamburg area which advocated a broad anti-fascist opposition movement, not the KPD’s “social fascist” line towards the SPD. But after the Gestapo searched his house early in 1933, he fled to Rotterdam, where he set up an – illegal – group of seamen under the umbrella of the ITF to distribute anti-Nazi literature and provide information on ship movements.

In December 1934, Knüfken was arrested in Rotterdam and expelled to Belgium. He moved to Antwerp where he became an activist in the International Transport Workers ‘Federation (ITF), and was, in effect, the leader of the Antwerp group. Very aware of the need for underground work to be clandestine, the Antwerp ITF group developed an ITF network of shop stewards, rather than of members, modeled on the revolutionary groups in the navy. Rooted in his early experiences, he emphasised the importance of the ‘rank and file’ group and personal, not formal, contact with the sailors and other sea-farers (a position which got up the nose of the KPD bureaucrats).

He and Fimmen, the head of ITF, developed a close collaboration, both profoundly committed to the anti-Nazi struggle. Both condemned the leading functionaries of the KP3D and SPD as well as the trade unions whom they saw as responsible for the defeat of the German workers’ movement in 1933 without a fight and through their sectarianism.

In 1936, Knüfken broke with the KPD and, together with Kurt Lehmann, led the key ITF resistance group. The Antwerp group had at least 300 sympathisers and many shop stewards on German ships and inland waterways and links to two port workers’ groups in Hamburg. They succeeded in recruiting many ex-KPD members and kept the Nazis of most of the ships.4 Knüfken was the only member to continue in the Antwerp group continuously from January 1936 to September 1939.5 . He also was primarily responsible for building up an organisation in other European ports and the USA.6 In 1944, Knüfken wrote that in contrast to other German resistance groups, though fully aware of the dangers they faced, ITF group members actively sought the defeat of Germany by any means possible.

From 1936 on, Knüfken had had contact with the British and French intelligence services. During 1936, Knufken, on behalf of ITF, had established contact with the British Secret Intelligence Service (SIS). Here, explanations get blurry. The head of ITF, the strongly anti-Nazi Fimmen, was not averse to working with ‘anti-Nazi’ intelligence services, a position which became far stronger during the war itself. Knufken, I suspect, was the link person. This link has been understood by some as Knufken in effect spying on his comrades. This, I suggest, is to misunderstand how far many revolutionaries ended up seeing the only way of defeating the Nazis being to ally with the Allies.

Whatever the exact relationship, it was probably through Knufken, that in 1939, SIS became aware of ITF’s plans to disrupt the supplies of iron ore to Germany through strike action by dockers and railwaymen in the event of war. SIS, Section D, also agreed to Knufken’s proposal on sabotage. Section D then planned to send Knuften to Scandinavia to gather materials and recruit ITF members and shop-stewards from German ports to commit sabotage and to link up with any ITF group that still might exist. Knufken had also asked the British consulate to send information about German warships and military installations in Swedish ports to the ITF in London, bypassing English censorship. The Swedish government was ‘neutral’ i.e. they cooperated with the Gestapo, so German refugees were targeted and ‘spies’ were arrested and the work amongst German seafarers had stopped.

Moreover, the Gestapo had already circulated Knufken’s photo and in 1939, Kuften was arrested in Scandinavia. (In one of those stories which lend themselves to spy movies, it seems Guy Burgess had probably informed the Soviets who in their turn are suspected of informing the Nazis as these were the days of the Hitler- Stalin pact. But an alternative explanation is that a member of the British delegation in Scandinavia betrayed him). 7 Knufken was interned, then imprisoned. The Gestapo tried to get their hands on him through an extradition order: both ITF and the British Foreign Office struggled –successfully- to stop him being deported to Germany. Somehow or other, he was relocated to a psychiatric prison and from there, released.

In 1944, Knuften got into the UK. In 1944/45, he wrote of the “guilt’ and complicity of German workers for Nazism, focusing on ‘the surrender in 1933 without a fight’.8 He wished that the post-war unions should be formed by the “small minority of the upright” who had put up active resistance and who “could not be blamed for complicity in the war” and who would stress the membership, not the leadership.

Knüfken became naturalised in 1947. From 1945 till 1950, he worked for the SIS in Hamburg , renewing contacts with seamen now in the Soviet zone, though it appears he clashed there with parts of the trade union movement. But by then it would seem that his politics had been ‘tarnished’ by his work with secret services and their emphasis, no doubt, on a ‘West is best’ perspective. He would not be the only ex-Communist to turn rightwards! That there does not appear to be any obituary for him suggests that, even 15 years later, he was still seen as the SIS’s man!

In 1950 he returned permanently to the UK, where he lived in Brighton, apparently withdrew from political life and worked for the London Port Intelligence office of the Foreign Office. In 1976 he died in Brighton, a member of the Tory Party!9

3 Kurt Lehmann was first a construction worker and then, in Antwerp, became a seaman. Fortunately at sea when the Nazis seized power, he went to Antwerp and joined the group there. Lehmann was expelled from Belgium and then followed some terrible and unsuccessful attempt to find safety. (See other biography)

7 Malcolm Atkin, Section D for Destruction: Forerunner of SOE: The Story of Section D of the SIS, Barnsley, Pen and Sword

8 Hermann Knüfken: About the resistance of the International Transport Workers Federation against National Socialism and proposals to rebuild the trade unions in Germany – two documents 1944/45, quoted by Dieter Nelles Proletarian Democracy and International Brotherhood