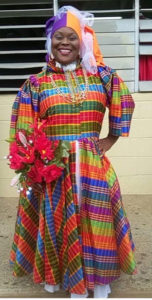 Award winning choreographer, Hazel Franco took a deep interest in the folk dances of Trinidad and Tobago very early in her career. Of all the dances, however, the Bele/Belaire engaged her the most. Its elaborate costumes, multiethnic dance movements and the foregrounding of women spurred her on to post-graduate studies in dance. While conducting research in Dominica, Grenada (Carriacou), Martinique, St. Lucia and Trinidad and Tobago she realized that the Bele/Belaire was more than simply a dance. For example, in the post WWII nationalist climate in Trinidad folk dances featured prominently in the local response to the US occupation of Trinidad, in Beryl McBurnie’s contemporary folk research and performances, and later in Prime Minister Eric Williams’s Best Village initiative. In this climate, the folk dance was positioned as a locus for visualising an indigenous (non-European), nationalist identity. Today, Hazel looks beyond the performative aspects to larger cultural and socio-political issues. In her Bridget Jones presentation, she will offer a reading of the Bele/Belaire as a potential discourse on the construction of a post-colonial identity, locally (Trinidad) and regionally.